We shall all be naked on judgment day

The last sermon of the Reverend Chauncy Pibs, d. 1745

Someone among us has been stealing meat pies, the same someone who has lately gained a prodigious amount of weight. You know who you are, you fat slut! Yes, you! The one with the greasy lips and squinty little piggy eyes! You may think it is a small matter, stealing meat pies, but that just shows how little you understand sin. For though it always starts small, it is never content to remain so, as you will now hear.

In the village where I grew up, there was a poor little orphan boy named Peter. He was apprenticed to a swineherd and though he had not a farthing to his name, though he owned neither shoes nor a hat, he at least had a roof over his head, and if he had to share his room with his master’s pigs, they at least kept him warm at night.

Then one day a rich gentleman stopped in our village. He was wearing a marvellous hat, and little Peter, who made himself useful by holding the gentleman’s horse, was as transfixed by the sight of this hat as the papists are by the sight of a statue or an icon or whatever it is that they worship. Oh, fatal infatuation! “If only I, too, had a nice hat, I could make something of myself!” said little Peter to himself, for in truth, he rather chafed at the idea of becoming a swineherd when he grew up. “But how can I when I have not so much as a farthing to my name?” He thought some more on the subject (thoughts did not come as quickly to him as they do to most people) and then he had an especially wicked thought: he would sell one of his master’s pigs and buy a hat with the proceeds “No one will miss just one pig,” he reasoned. The wicked thought was followed by the wicked deed, and now Peter had his hat and the master had one less pig. But it is in the nature of sin for the small to beget the large, and now that Peter had a magnificent hat he yearned to have a proper suit of clothes to go with it. And looking down at his bare feet, he thought: “If only I also had a pair of shoes and buckles and stockings to go with them!” By the time he had added up all the other things he needed to go with his new hat he reckoned that he would need at least a hundred pigs to pay for them, and so one night, while his trusting master slept, he drove all his pigs down to Smithfield and sold them to the very first butcher he met.

Two years have now passed. Peter has fallen in with bad company, with whores and gamblers and thieves: in this way does the sinner squander the wages of sin on still more sin! Many are the bitter tears of repentance he now weeps, many the times he wishes for nothing more than to return to his village and tend to his master’s pigs! But alas, it is too late, and Peter sinks ever deeper into sin. Next he steals a horse, sells it to buy a gun, and then uses the gun to get the horse back. “Can it be that I have become a highwayman?” he asks himself, and seeing that he already has the tools of the trade, namely a gun, a horse, and a rakish hat, he makes straight for Hounslow Heath, where, brandishing his pistol, he stops the very next coach to come along. The passengers, trembling all over, give him their money and valuables. But then his horse goes lame just as he is about to make his escape, his gun fails to discharge, and the passengers he has just robbed fall upon him and drag him before the nearest justice of the peace.

Now behold Peter, a scant three weeks later! It is his turn to tremble as he stands before a jury in the Old Bailey. The passengers are all there; each swears he is the man who tried to rob them; and as if their evidence isn’t enough, that hat, that damnable hat, is carrying on its own sinister congress with the jury, practically begging them to convict its owner. There can be no question of mercy: Peter is sentenced to be hanged by the neck until he is dead. The dreadful day of reckoning comes all too soon, and the only thing standing between poor Peter and the noose is the hat that started all his troubles. The hangman removes it so that he can slip the noose around his neck, but instead of placing it back on Peter’s head he places it on his own, and that is the last thing Peter sees as he is turned off: a hangman wearing his hat.

When he wakes up it is Judgment Day. There he is, stark naked, and standing next to him is the hangman, who is also stark naked except for Peter’s hat, which he is still wearing. In fact, everyone is naked, and he can’t help noticing the women who are waiting their turn to be judged. Sluts! Big be-bosomed sluts! Sluts with pudenda! Sluts who wiggle their—(It was here that Mr Pibs’s body and soul took their leave of each other, the first falling directly into the pew below, the second ascending to its Maker.) 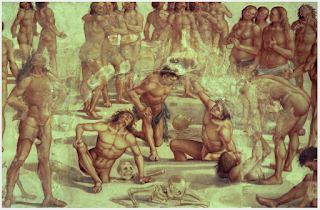