On the proper use of analogies 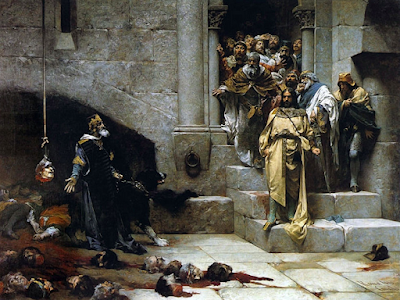 There once was a monk, a Benedictine as it so happened, who was inordinately fond of cabbages. These he cultivated with such success that they were a thing of beauty to behold, all uniform and tidy in their rows, and it was only when one outstripped the rest and threatened to deprive them of sunlight that he took out his knife and lopped off its head. On those days, while the other monks feasted on cabbage soup, he would fast, and though he said nothing, it was clear to all that he was meditating on important truths.

This monk’s real name was not Brother Chou, but that was the name the other monks gave him on account of his fondness for cabbages. They, in turn, were very fond of cabbage soup, so that when the old abbot died, they unanimously elected Brother Chou as their new abbot, and as names, even the wrong ones, have a habit of following their owners wherever they go, he now became Father Chou.

Father Chou’s habit of meditating on important truths had not gone unnoticed, and he soon acquired a reputation for uncommon wisdom. He did not say much, and what he did say was always of a metaphorical nature, with some aspect of gardening—the soil, the seasons, the pests common to cabbages—always figuring in his teachings. The fact that he did not say much, far from being taken as a sign of stupidity, was taken as a sign of a wisdom so profound that mere words could not possibly express it, so that the less he said, the more his reputation for uncommon wisdom grew. People flocked to the monastery just to ask him what they should do, and, kindly man that he was, he always obliged them by taking them out to the garden and showing them his cabbages.

Word reached the king of Aragón that there was a monk named Father Chou who was uncommonly wise. He made the journey to the monastery, and after enjoying a delicious bowl of cabbage soup, asked to speak to Father Chou. This king, whose name was Ramiro, had come to the throne under most unusual circumstances. When his older brother, who was the king before him, died without issue, he left the kingdom to the Knights Templar. His barons, however, had risen up and, despite his many protests, placed Ramiro on the throne.

“You go back to praying,” they told him, “and leave the running of the kingdom to us.” And having the run of the kingdom all to themselves, they proceeded to plunder it, and a man could not go about his business or plow his fields without being set upon by the barons’ men, so that the people went hungry while the barons every day grew richer and more powerful.

The king described this sad state of affairs to Father Chou, who, as was his wont, tended his cabbages as he listened. When he had finished his account, he waited expectantly for an answer, but instead Father Chou took out his pruning knife and without further ado lopped off all the cabbages that had grown higher than the rest. “It’s the only thing to do with the ones that have got too big for their britches,” he said, and that, the king realized, was all the advice that he was going to get out of Father Chou.

The king rode away and each time he thought about what he had seen and heard, he was no closer to making sense of it. When he reached his palace in Huesca, he sent for his confessor, who, being French, was wily and not unduly troubled by scruples. This confessor was also a little vain about his learning, having read something of Aristotle.

“I’ve just had a very strange encounter,” said the king. He proceeded to describe his meeting with Father Chou. “What could he possibly have meant?” he asked. “Or did he mean anything at all? Because between us, I couldn’t help thinking that the only thing he really knows is how to grow cabbages.”

“Oh, but can’t you see?” exclaimed the confessor, growing very excited. “He furnished you with what Aristotle calls an analogy, a very elegant one, if I may say so myself. The cabbages that have grown too big for their britches are the barons—”

“Which means I’m supposed to chop off their heads? But that’s a sin,” the king protested.

“Not if I absolve you first,” replied the wily confessor.

The confessor, who was a bit of a prankster himself, proposed that they should repay the barons in kind. “Let it be known that you mean to replace the old bell with one that will so far exceed it and all other bells that when it is rung, it will be heard throughout the kingdom.”

“But that is physically impossible,” objected the king.

“Physically, yes,” conceded the confessor. “But not figuratively.”

The king was as perplexed as he had been after his visit to Father Chou. “I still don’t see what a bell has to do with chopping off heads,” he said.

“All in good time,” the confessor assured him, adding, because he was nothing if not wily, “The less you know, the less you will have on your conscience.”

Soon after, two French bell-makers, both cousins of the confessor, arrived in Huesca along with their assistants. One of these, it was soon observed, never seemed to do any work, but as he was a big burly sort of fellow and went around with an enormous axe slung over his shoulder, no one dared asked him his business. “His name is Idelphonse,” said the confessor and nothing more.

When the bell-makers had finished their work the confessor took the king to see the new bell. The king was clearly disappointed. “But it’s no bigger than the old one!” he exclaimed. “Are you sure it can really be heard throughout the kingdom?”

“Absolutely,” the confessor assured him.

A day was set for the bell to be rung for the first time, and the king, at the confessor’s prompting, invited the barons to attend as his honored guests. “Now that’s more like it,” they said when they received the invitation. “And look: it says here that he means to present each of us with a gift of great value.”

Their leader, however, sensed a trap. “There’s something not right here,” he said. “If this bell really can be heard throughout the kingdom, why is the king summoning us to Huesca just to hear it?” This man had a most wonderful name, Don Lope Ferrench de Luna, and as wiliness went, he was very nearly as wily as the confessor.

The others, however, took this resort to reasoning as cowardice on their leader’s part, and were, besides, much taken with the idea of being presented with a gift by the king. But just to steal his thunder, it was agreed that the night the bell was to be rung for the first time, one of them would sneak into the bell tower and cut down the clapper. Don Lope Ferrench de Luna, still smarting from the imputation of cowardice, volunteered to do the deed.

When they arrived in Huesca, they were most courteously received by the king, who, as was the custom in those days, treated them to a great banquet. His choice of wines was much praised, and the king, who had himself abstained, said that he was most glad to hear it because he had set aside a barrel for each of them in his cellar. He invited them to join him there, and as Don Lope Ferrench de Luna was their leader, he should be the first to receive his gift.

The confessor, who, like the king had also abstained, led them to the entrance to the cellar, and one by one, with Don Lope Ferrench de Luna at their head, they made their way down the stairway, which was narrow and twisty and dark and unpleasantly damp—in fact, all the unpleasant things a stairway in a castle can be. There were thirteen men in all, all already tipsy on the king’s good wine, and as each staggered into the cellar, Idelphonse stepped forward, and, swinging his enormous axe, lopped off his head.

In the morning, the good people of Huesca woke to find twelve bloody heads arranged around the bell, with a thirteenth, Don Lope Ferrench de Luna’s, hanging from the clapper. Those who heard it rung that day agreed that it sounded very much like the old bell, but their children said that it was indeed heard throughout the kingdom because from that day on the king had no further trouble with his barons and ruled the kingdom in as much peace as was possible in those days.

This shows the power of reasoning by analogy, even if the analogy itself is incorrect.