There once was a poor little shepherd boy, who, in addition to having no money and scarcely any clothes, had no family either. Because of this, he was known simply by his Christian name, which was Pierre, and because he was deaf and dumb, people called him Pierre the Simple to distinguish him from all the other Pierres in the village. His only companion was a sheepdog, who, however, had a most remarkable gift: he could speak. Pierre, naturally, had no way of knowing this, and since the dog spoke only to him, no one else in the village knew either. 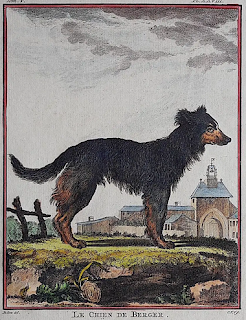 One day Charlemagne visited the village and Pierre and his dog went to pay their respects in the great tent that had been set up for this purpose. The emperor received them very kindly, and asked Pierre whether he would like anything. Pierre just stood there with his mouth open, so the dog answered for him.

“Not at all, sire,” replied the sagacious dog. “It’s more common than you might think. Especially among sheepdogs.”

Now when word of this interview reached the village no one seriously believed the part about the talking dog. “Say something!” they said to the dog, and though he was sorely tempted to speak he couldn’t because he was too busy chewing the nice juicy bone the emperor had given him. But the name stuck, and so from that day on, Pierre was known as Pierre Formidable, so that while he still had no family, he now at least had a last name, which he passed onto his sons, and they to theirs, one century after another.

But dynasties, like stories, must come to an end, and so it was with the Formidables. The last man to bear that redoubtable name was a certain Jacques Formidable, who lived and died in the time of Louis XIV. Why he should have left no heirs is a secret he took with him to the grave, but it was not for lack of trying, for his wife (her name was Marie) was very beautiful and he was madly in love with her. In fact, at every chance he would rush home just so that he could jump into bed with her. This uxoriousness was a source of endless amusement to his neighbors. He would be running past them, and each and every time they would cry out, “Off to see your mistress, eh, Jacques?” And each time he would foolishly take the bait and reply (rather primly) that he was a married man and that there was only one woman he had ever loved—and would ever love—and that was his wife. To which they invariably replied, laughing themselves silly, “Your wife? Mais, c’est formidable!"

This childish joke, repeated several times a day, produced a curious effect on poor Jacques: though he never waivered in his love for Marie he came to loathe a name that seemed to produce nothing but endless punning at his expense. And so when he felt the chill hand of death upon him he called his beloved Marie to his bedside and said: “My name has been a curse to me. Let it be buried with me.” And with that he breathed his last.

Marie was torn. Good wife that she was, she dearly wanted to honor her husband's dying wish, and yet Jacques had been such an exemplary husband that it seemed a crime to consign his memory to oblivion. “Leave it to me,” said the stonecutter, who produced the following epitaph for Jacques’s tombstone: “Here lies a man who was faithful to his wife.”

In some ways, Jacques got his wish, for today nobody remembers the Formidables. But his grave has become something of a destination in that part of France, for there has never yet been a visitor who has seen it without exclaiming, “Mais, c’est formidable!”