On the beauties of fencing. A Domenico Angelo story 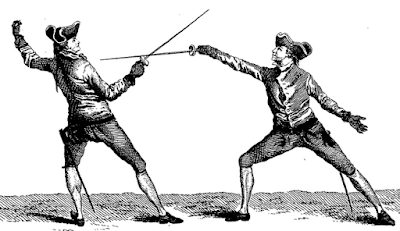 Don Domenico Angelo (1717-1802) was by all accounts the greatest swordsman of his day. His travels took him from Livorno, where he was born, to Paris and finally to London, where he founded a fashionable fencing academy. His stories, which were legendary, were never recorded, but that does not mean that they do not exist.

You would be surprised how many people come up to me, the most accomplished swordsman of all times, and say: “I do not see the point of fencing.” To which I always say: “Not see the point of fencing! But perhaps you think it is nothing more than a way to kill someone? If so, there are better ways to do it. Your private soldiers, for example: their general lines them up, gives them muskets, and says, “See those stronzi over there? The ones that are pointing their muskets at you? Point your muskets at them and see if you can’t kill them first.” Bang-bang! Half the men on both sides fall down dead. Or perhaps the general gives his soldiers cannons instead. Again bang-bang! Again a massacre, only this time everyone’s blown to bits and there are heads and arms and legs everywhere but where they should be and you can’t go anywhere without stepping on brains and the pebbles that stick to your shoes aren’t pebbles at all: they’re some poor diavolo’s teeth.

But fencing! It is such a thing of beauty that no one ever objects if he happens to be killed as a consequence, provided only that the fatal thrust is made with proper elegance.

I myself once ran the Marchese di Montenero through with such art that his very last word, spoken even as the blood was spurting out of his mouth, was “Bravo!” Naturally, I accompanied the body back to the castle, where the marchesa was waiting. She examined the body in silence, not so much as a tear showing in her proud eyes, and afterwards, placing the shroud back over it, said: “Signor, I want to thank you. The wound you gave my husband, though fatal, was so clean, so perfect, that you have returned him to me as beautiful as when he left.” I bowed in acknowledgment of this pretty compliment. “Ah, signora la marchesa,” I replied with a sigh. “It is too true. Fencing is all about beauty.” Only the word I used was bellezza because naturally we were speaking in Italian. She, in turn, maintained that this was not always true: “What about the Spaniards? Their swords are nearly five feet long from hilt to point, and cut with both edges. A prodigious length, I am sure you will agree, and yet the men of that race always manage to keep them up, and it is to the face they invariably direct their first thrust. This, if successful, they follow with a thrust through the chest, which is instantly fatal. A mercy to the victim, perhaps, but not to the widow who is left to clean up afterwards.” “Ah, marchesa!” I cried, full of admiration, “I can see that you are a woman who knows her swords.” “Do I know my swords?” she asked, with all the loftiness that comes so naturally to a woman of rank, “if you will but show me yours—”

I should add that there is yet another reason why gentlemen should learn to fence: it does wonders for one’s stamina—