How a horse made an ass of his master. From The Witty Sayings and Doings of Mr John Wilkes, Esq. 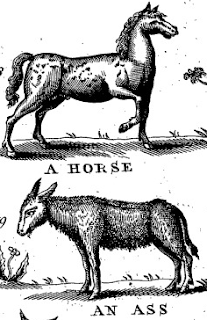 In 1762, John Wilkes and Lord Talbot fought a duel in which, suspiciously, neither man was hurt. The ostensible cause was a particularly scurrilous libel written by Wilkes; that Talbot had in fact been the victim of one of his famous practical jokes was something neither man could admit to at the time. But in 1777, with the incident long behind him, Wilkes wrote a full account of the prank, meaning to publish it in The Witty Sayings and Doings of Mr John Wilkes, Esq. The complete manuscript has since disappeared, but pages from it are to be found randomly interspersed among the various family papers held in the British Library.

It has now been some fifteen years since Lord Talbot, earl of that name and one-time Lord High Steward of England, has ridden a horse. Just the mention of one will throw him into a rage, and his stables, once stocked with the finest horses in the kingdom, now lie empty. He will tell you that this is on account of his advanced age, but if you were to see him you would pronounce him one of the fittest men in the kingdom, fitter, in fact, than men forty years his junior. No, the real reason is an incident that took place at his Majesty’s coronation, and though Talbot blames me for the misfortune that befell him there, that is rather like the condemned man blaming the executioner for his sentence.

I should start by saying that Lady Talbot was a very proud woman and, as is often the case with such people, of an exceedingly reserved demeanour. Her husband’s infidelities were therefore a great trial to her, one that was rendered worse still by her having to bear them in silence. But she was also possessed of great cunning, and this, combined with an equal measure of patience, made her a most dangerous adversary. Talbot, then, should have been on his guard when his wife suddenly started to take a friendly interest in his career. The old king had just died, and Talbot’s first (and only) thought was how he might make a pleasing impression on the new king. Lady Talbot, in her new role as faithful helpmeet, had an idea: he should play as conspicuous a part as possible at the upcoming coronation, and it was thanks to her efforts that he secured the most conspicuous post of all: that of Lord High Steward.

As part of this office, Talbot was supposed to ride into Westminster Hall and announce the arrival of the king’s champion. Because all eyes, starting with their Majesties’, would be upon him, Talbot, not unreasonably, worried about the effect the hubbub might have on his mount. And so he chose the most placid horse in his stable: a young gelding that was, in its complacency, already going to fat. It was this horse he now began training for the grand entrance he was to make on it. Lady Talbot looked on, casting an appraising eye on his performance. “Yes,” she at last pronounced, “that’s quite adequate. But do you know what would be remarkable? If your horse were to withdraw from the royal presence by walking backwards—” “Like a proper courtier!” interjected Talbot, clearly very excited by the idea. “Exactly,” replied his good lady. Accordingly, Talbot spent the next several weeks training the horse to walk backwards, all the while picturing their Majesties’ delight at this pretty display of court etiquette.

The day before this performance was to take place I received a most unusual invitation. It was from Lady Talbot, begging me to come to her at once. I knew her only by reputation, but she already seemed to know a great deal about me, for when I presented myself she launched into a discussion of pranks, gradually narrowing the topic to the many I had already been known to play, and the even greater number that have been imputed to me. At last she came to her reason for summoning me: “What if I were to tell you that I intend to play such a trick on my husband that he will never live it down?” I begged her to take me into her confidence, which she now did. Tomorrow morning, just before Talbot set out, the stable boy was to add a peck of figs to the horse’s oats. “A whole peck!” I exclaimed. “But that will cause the poor brute to—” “Yes, I suppose it will,” she replied, smiling ever so faintly. “And if a certain faux-pas were to occur directly in front of their Majesties—”

“It would leave his Lordship in a decidedly bad odour—”

“Decidedly. But that is not all I have planned for him—” She went on to describe the singular trick the horse had been taught to perform and the use she meant to make of it: if someone—and here she looked fixedly at me—were to give the command to back up just as Talbot made his entrance, the horse would, in its confusion, wheel around and proceed rump first down the length of the hall. Naturally, she could not be that someone, as that would make her the sharer in her husband’s disgrace, but if someone else, someone who was renowned for his wit and who spoke perfect French besides, if that someone were to pronounce the word recule at just the right moment—the command, of course, had to be in French, and, because it was to a horse, in the familiar—if some clever prankster were to pronounce that word, very clearly and distinctly, mind you—

The following morning, then, I placed myself among the great throng in Westminster Hall, waiting for Talbot to make his grand entrance. When he at last arrived, he surprised us all by stopping just outside the doorway, as if uncertain of whether to go through with his part. The reason for this indecision soon communicated itself: the horse was producing a great fanfare of farts, squealing, rumbling explosions, as unstoppable as the sea and smelling (not unpleasantly) of figs. At last, plucking up his courage, Talbot spurred his horse on, whereupon I, having taken the precaution of concealing myself behind a pillar, gave the command Recule! just as her Ladyship had bid me.

They say that Prussian soldiers are so perfectly disciplined that when they are ordered to advance they will not stop until they walk straight into a wall, and so it was with Talbot’s horse: upon hearing the familiar command he wheeled around and proceeded to back his way straight down the hall, not stopping until he was within a few feet of their Majesties’ table. It was at that precise moment, with his backside to them, that the unfortunate animal emitted a fart for the ages, as loud and piercing as Dido’s lament, now in a major key, now in a minor, now pleading, now defiant, sometimes fortissimo, others piano, and, but for its source, strangely affecting.

Attend a meeting of the Royal Society, wait upon the king at his levée, enter the meanest gin shop in Bethnal Green, gather with the mourners at the funeral of your best friend, and you will find that people are still discussing that fart. It is the source of endless jokes, the staple of every wit’s stock of anecdotes, an object of endless speculation, a cause of controversy and faction. Some maintain that it was an act of God, others that it was an act of man. When the question of which man then arises, it is always my name that comes first. I admit to being more than a little flattered by the imputation, and if I have added to my reputation by saving Lady Talbot’s, are we not both the gainers? 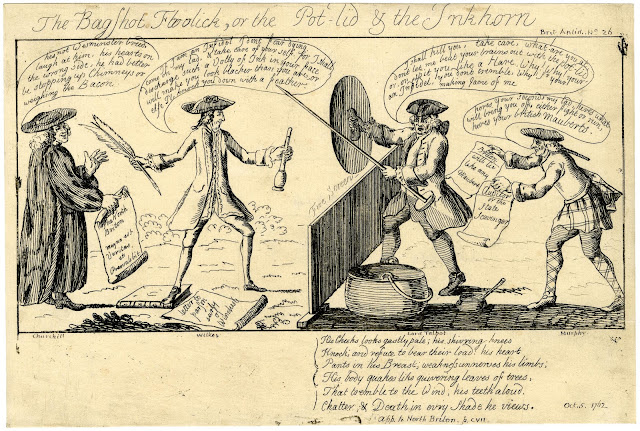